Borchi® Gel PN is a VOC-, APEO- and tin-free organic zirconium complex thickener neutralized with ammonia. Benefits of this rheology additive include highly effective storage stability and prevention of settling and sagging. It improves viscosity stability after tinting with universal colorants in water-based coatings systems. 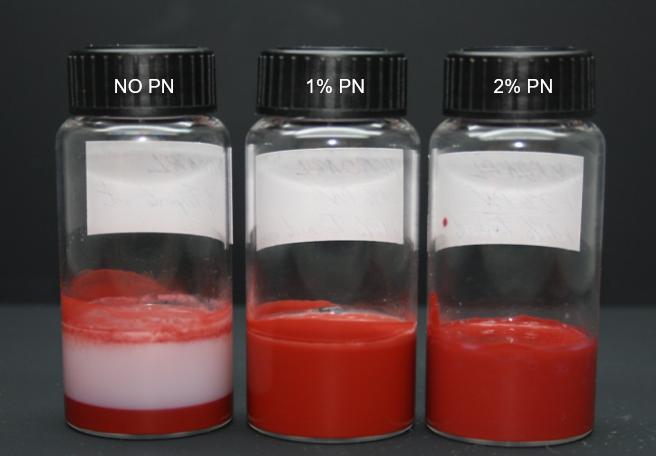 Concentration levels need to be optimized as too high a level can lead to excessive crosslinking, which may cause separation and structure loss. There is no need for biocides when using this product.

Borchi® Gel PN can be used with our Borchi® Gen 1252 wetting and dispersing agent for titanium dioxide (TiO2) pigment dispersions. Benefits of using both products together include the elimination of settling, as well as improved viscosity variance over time and extended heat age stability. Borchi® Gen 1252 provides high opacity and strong tint strength in pigments. There is no change in gloss or contrast ratio with the use of these products. Borchi® Gel PN is more effective than fumed silica in TiO2 formulations.

Borchi® Gel PN in WB PY 184 dispersion brings anti-settlementation and long-term stabilization of dense inorganic pigments. The viscosity profile does not impact the flow behavior of the pigment concentrate, allowing for higher pigment loading when used in combination with Borchi® Gen 1757

Other rheology modifier additives from Borchers that are known for thixotropy in the low shear range and based on an organic zirconium complex include Borchi® Gel NA. Borchi® Gel NA is neutralized with sodium hydroxide.

The level of Borchi® Gel PN or Borchi® Gel NA is important.  Too much can lead to excessive crosslinking, which may cause separation and structure loss

Borchi® Gel PN is ideal for use in architectural and general industrial coating applications.